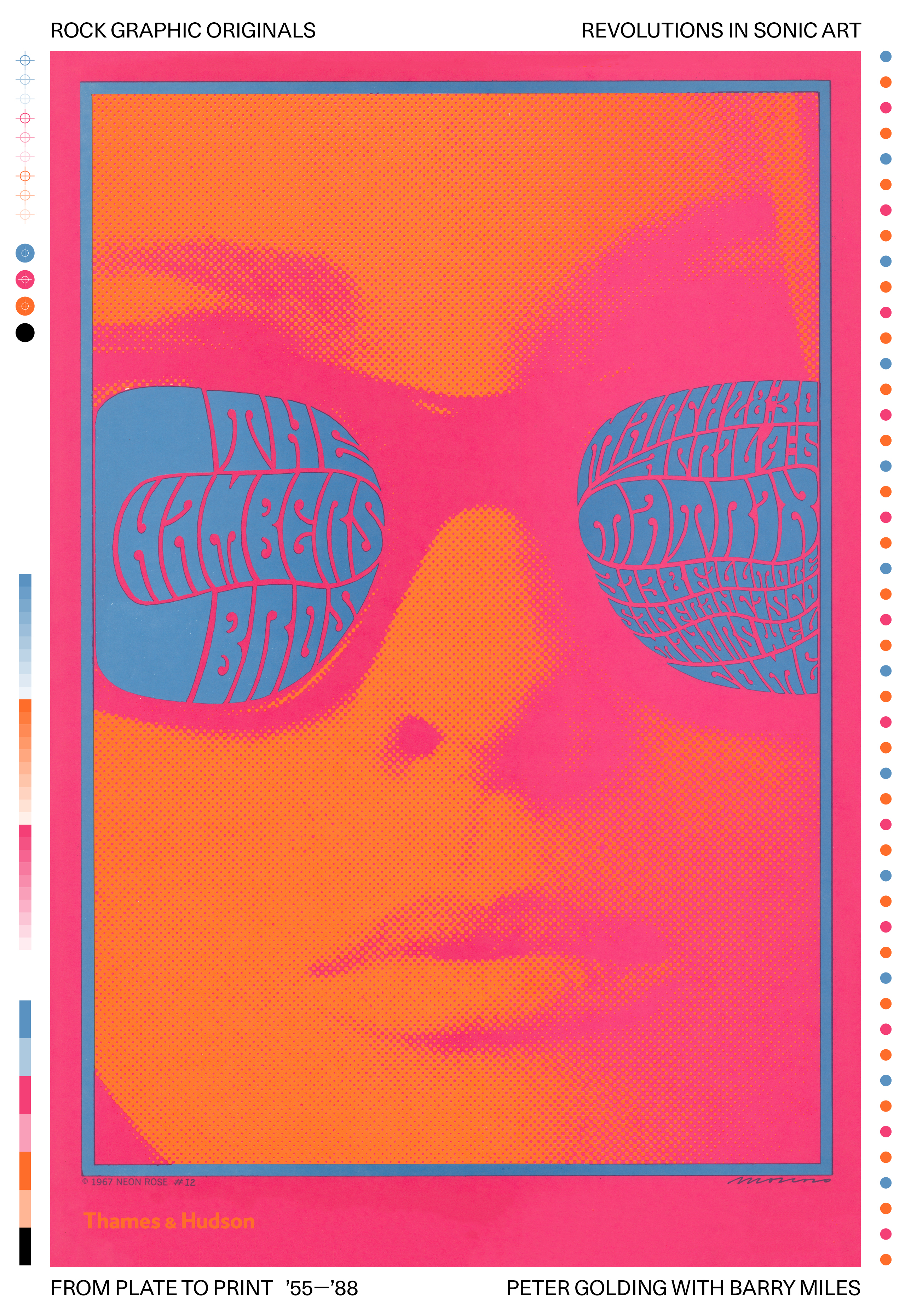 Peter Golding, a Fellow of CSD, amassed over the years a collection of rock graphic memorabilia that would grace any museum collection. In fact in 2003 Sotheby’s staged a major international exhibition of some 300 pieces from his collection, ‘Inspirational Times’, at their Olympia venue;  his collection has featured at Tate Liverpool’s ‘Summer of Love’ exhibition (2005) and contributed to the V&A’s ‘You Say You Want a Revolution’ (2016-17).

He is a musician and fashion designer and created the world’s first ‘designer jeans’. He picked up his first item, a poster from a protest concert, in 1967. As a leading figure in the 60s and 70s fashion scene with his ACE boutique in Chelsea, he mixed regularly with the biggest names in rock at the time, lending provenance to his collection.

This new book, ’Rock Graphic Originals: Revolutions in Sonic Art from Plate to Print ’55-‘88’ sets his collection in both an historical and cultural context with authoritative text from Barry Miles, a bestselling author of many histories and biographies of the Beat Generation, a founding member of International Times (1966) and regular contributor to OZ, the NME and Time Out in the 60s and 70s.

For those reminiscing, opening this book is like opening your mind on a trip down a psychedelic memory lane.  From the front of the book a face on a Cambers Brothers poster by Moscoso stares out from an orange and magenta dot screen through cyan glasses bearing the familiar flowing barely legible lettering and inviting you to look further. It is then that the visual and musical memories start flooding back.

The book carries an informative introduction section providing a timeline from 1954 when Aldous Huxley describes his LSD experience in ‘The Doors of Perception’ through to the fall of the Berlin Wall in 1989 and the various rock culture interventions throughout. The visual influence on psychedelic poster and album design of Kitagawa Utamaro, Aubrey Beardsley, Henri de Toulouse-Lautrec and Alphonse Mucha is acknowledged in the intro, although the absence of William Blake is noticeable.

When flipping through the pages of the book it is not only the sound of the music and the visual imagery that echoes from the past: it is a whole experience of moments that coloured this period, the OZ trial, Grosvenor Square, anti-Vietnam war rallies, Kent State University, Ho, Ho, Ho Chi Minh’s Little Red Book, the Beat Poets, the Roundhouse happenings, Perfumed Garden, concept albums and fill in the rest from your memories.

Some of the images will be familiar if you were buying the albums or attending the gigs; the other unseen images will be equally familiar as they speak for a whole period of graphic design that encompasses a mood and way of thinking that now feels comforting as opposed to revolutionary.

Those buried in the underground culture of the time will readily identify images designed for the Yardbirds, Butterfield Blues band, Grateful Dead, Crazy World of Arthur Brown, Moby Grape, Country Joe and the Fish and the haunting Incredible String Band, whilst imagery associated with more recognisable names such as the Rolling Stones, Jimi Hendrix, the Beatles, Alice Cooper, Pink Floyd, Cream, etc. illustrate the importance of rock music across the whole musical experience.

For the more curious designers amongst us there are insights into the development and influences of the imagery, noticeably the section ‘Designing the Dead’ which depicts the late Rick Griffin’s sketches and designs for posters for the Grateful Dead, acknowledging 17th century artistic references, and displaying various logo styles developed for the band.

Griffin’s 1969 poster for a Fillmore East concert featuring Jimi Hendrix and John Mayall stunningly shows his signature icon the flying eyeball which was produced more than six feet (1.8m) high. Although it is reproduced here under one foot high, it still begs to be hung on the wall.

And that is what the book is about: bold, enthusiastic, youthful, rebellious, loud, vibrant, fantastic, surreal, mystical, evocative imagery with eye straining words swirling around and serifs flowing into eternity.

This book is a visual treat and can only be bettered by grabbing your favourite vinyl and putting it on the turntable whilst looking through the pages.