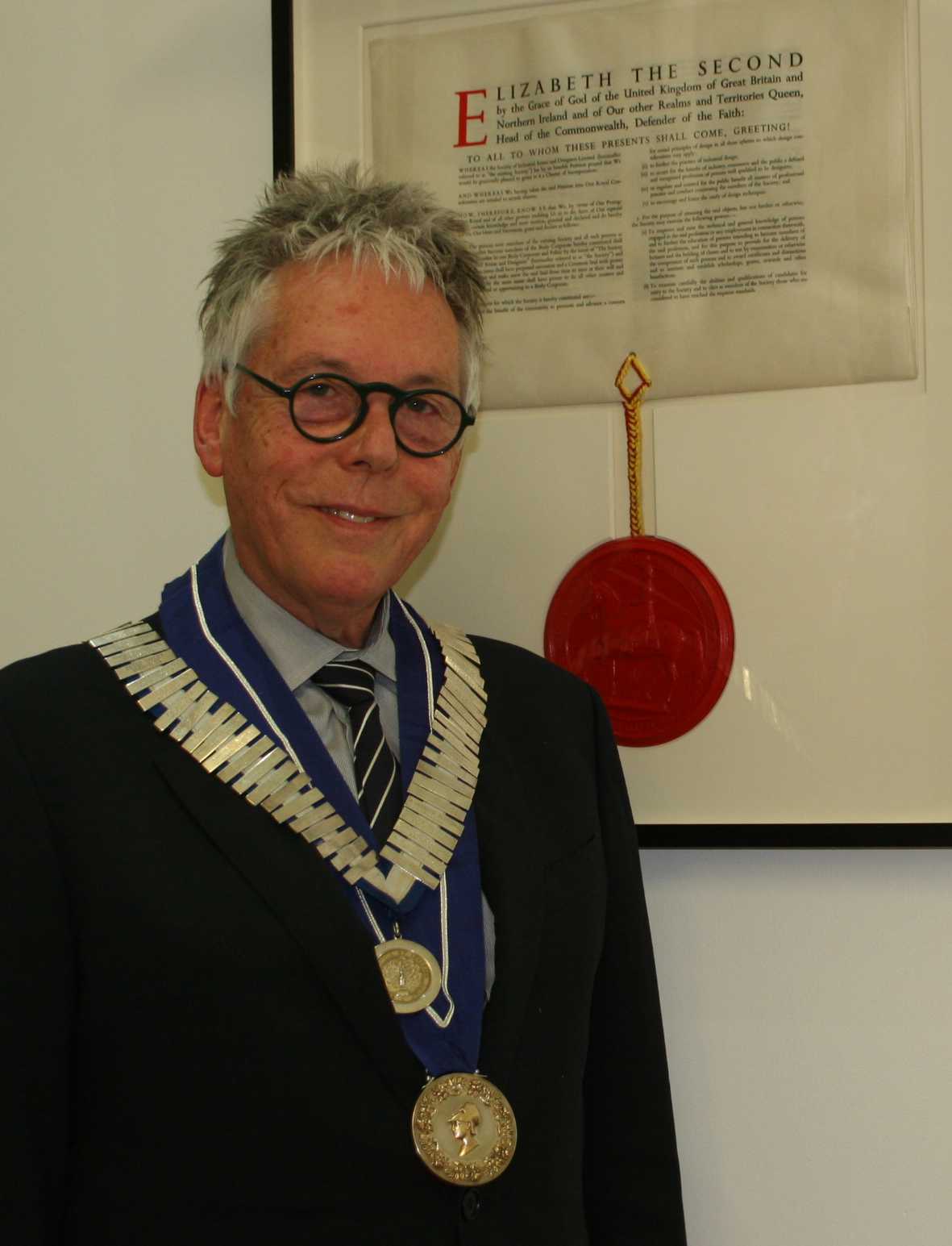 The CSD President with regalia.

At its recent AGM, the Society elected and welcomed David Callcott FCSD as its new President. His journey through both his design career and membership of design bodies makes for a compelling read and not only illustrates the development of his career but also that of the Chartered Society of Designers (CSD) and the wider profession. Standing before our Royal Charter, he recalls his early career and those who influenced it.

“Between 1960 and 1964 I served as an apprentice, gaining my City and Guilds in Advanced Decoration. I then successfully applied to attend Medway College of Art where I studied Interior Design from 1964 to ’67. I remember well sitting the intermediary exam of the Incorporated Institute of British Decorators (IIBD) before doing work experience for a year and then returning to sit the final exam, which I am pleased to say I passed in 1968. My tutor on the course was Les Fawcett who was very active in the IIBD as chairman of the Southern District Committee. He was a great influence on me and I had the pleasure of remaining friends with him for many years. In the early 70s I was invited to join the Southern District Committee and became an active member of the region for many years and Les went on to become President of the institute“ says, David Callcott FCSD.

The Incorporated Institute of British Decorators has a long history being formed in 1894 by a contingent of members of the Worshipful Company of Painters and Stainers which received its Inspeximus (the earliest form of Royal Charter) in 1466, although the earliest reference to ‘Peynters’, those who decorated, gilded and coloured objects, dates back to 1283. In 1899 the institute was ‘incorporated’ and this was added to its title.
During the middle decades of the 20th century the terminology ‘interior design’ became more widespread both in practice and design education and fissures began to appear between those practicing ‘interior decoration’ and those who saw ‘interior design’ as a more professional status. A tension that remains to this day!

By 1975 the Incorporated Institute of British Decorators was also ready to make the transition and under the guidance of David’s early tutor Les Fawcett, who by now had become President of the institute (1974–5), the name was changed to become the British Institute of Interior Designers (BIID). The transition from interior decoration to interior design was complete, by both David and the two main professional bodies. Just one year later in 1976 and 510 years after the granting of the Inspeximus to the Peynters, the SIAD was awarded its Royal Charter.
It took a further 25 years for the Interior Decorators and Designers Association (IDDA), which was founded in 1966 and included both descriptors, to drop the word ‘decorators and become the British Interior Designers Association (BIDA) in 2001.

Interior design was now well established as a discipline and generating ample rewards and economic growth and the need for interior design education grew. As David recalls, “I was always driven by design education and professional standards and after floating my company on the Unlisted Securities Market in 1985, I was invited by Medway College of Art to become an Independent Governor of the College which developed into the Kent Institute of Art and Design (KIAD). I served as a Governor until the early years of 2000 following which the KIAD merged with the University of Creative Arts of which I have since been awarded an Honorary Fellowship.”
The two bodies, SIAD and BIID, continued their respective work in interior design education and in representing the professional interests of practicing interior designers. The Society’s Royal Charter gave a seal of professional acceptance to design and this led to suggestions that the two bodies should consider a merger and discussions commenced in 1983.

For the next five years the councils’ of both bodies discussed the details and implications of such a merger and in 1988, by which time the SIAD had changed its name to the Chartered Society of Designers (1986), and under the direction of Eddie Emamooden, President of the BIID and Kenneth Grange, President of CSD, members of both bodies voted that the British Institute of Interior Design should become part of the Society whilst maintaining its identity within the Society.

Members and Fellows of the BIID automatically transferred to the same status in CSD. “It was as a result of this merger that I became a Fellow of CSD and I was proud to belong to the Society’s newly named group: CSD Inscape Design – incorporating the British Institute of Interior Design” David recalls.
The merger, which came about in 1988, provided a sound basis for supporting interior design professionals at every stage of their careers and promoting interior design as a profession. As the introduction in Insite, the magazine of the BIID, stated in 1988:
‘The increased interest in, and a rising level of understanding of, the role that design has to play in the generation and regeneration of successful enterprises in this country increases the responsibility of professional bodies to ensure that the interests of designers are presented in a coherent, focussed and relevant manner. The force of this argument will be most powerful if articulated by a unified voice.’ [1] 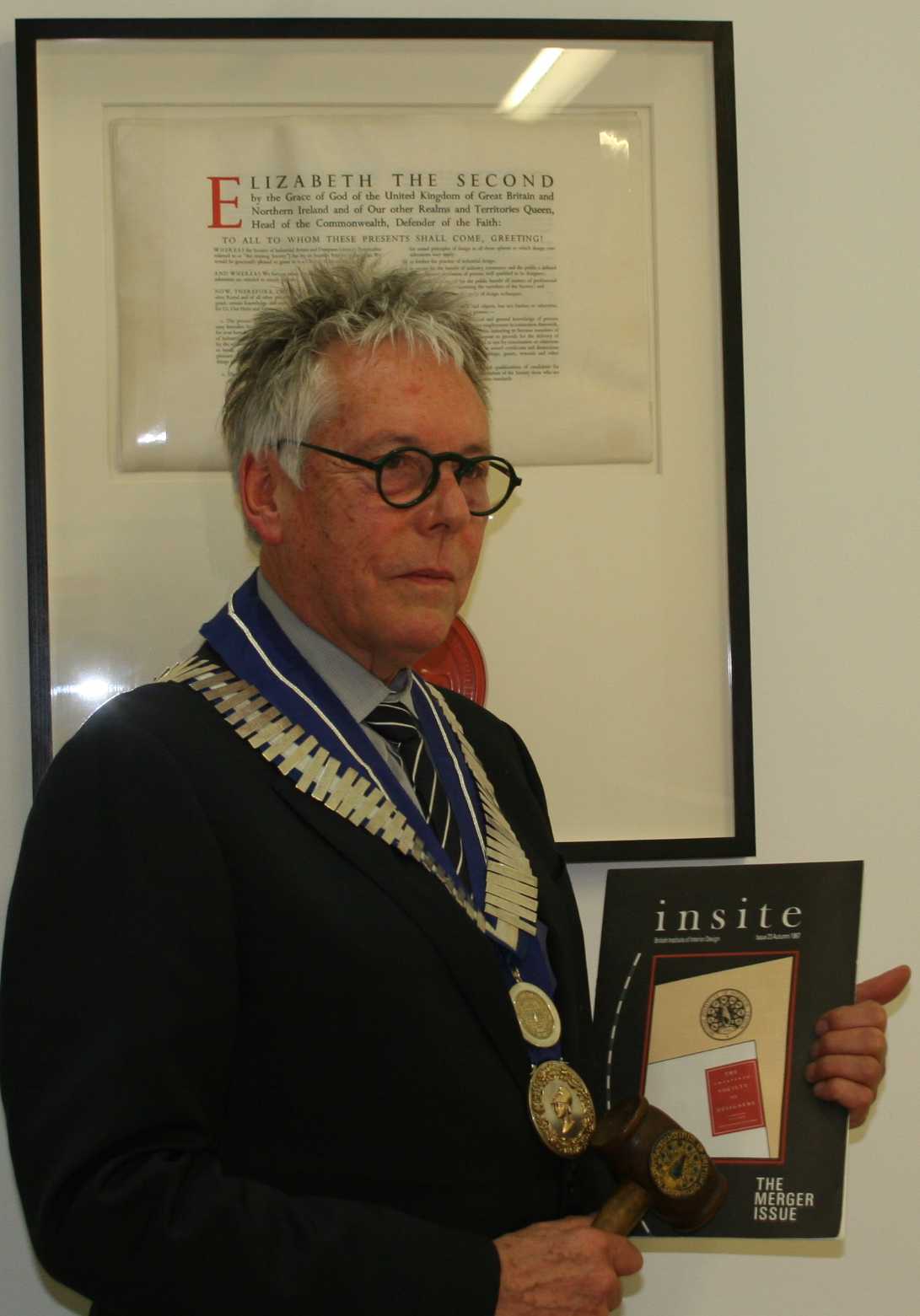 The President remembers being a member of three design bodies

In absorbing the British Institute of Interior Design the Society acquired its goodwill and heritage built up over many decades. This is on display in the photograph of David wearing the CSD President’s medal together with the medal and chain of office of the British Institute of Interior Design which bears the names of all its Presidents since 1899, including that of Les Fawcett his tutor at Medway, and on the last band that of Eddie Emamooden, the last President of BIID in 1988.

An interesting artefact is the BIID gabble sported by David and made to celebrate the coronation in 1953. Both the medal and chain and the gabble show the BIID logo of a peacock with the formation date of 1899 below.
As a Fellow of both BIID and then CSD, the merger would also transpire to influence David’s own career and lead to his current appointment as President.

The synergy of the two professional bodies appealed to David’s passions and since becoming a CSD Fellow he has worked hard to ensure that professional standards are met and upheld as a CSD assessor and supporting student activity within the Society. His history as a design professional coupled with his position as founder and Creative Director of CADA Design Group -a specialist brand and retail interior design consultancy- hold him in good stead as CSD’s President. As someone who has a sound understanding of the importance of interior design within the industry as a whole, David’s origins as firstly a member of IIBD, then of BIID and now CSD, provide significant insights into the design industry’s pathway to designing and establishing a profession and a better future for design and interior design in particular.

Equally as significant is David’s personal commitment to design education, which was and is a strategic remit for the British Institute of Interior Design and the Society. His commitment and attentiveness to design education ensures that CSD’s work within its Course Endorsement Programme, which accredits Design courses at Nottingham Trent, Plymouth and Derby Universities and Chelsea School of Art and Design, and student and tutor support will remain a top priority. Shortly after his election as President in December 2013 David wasted no time in working with students from Plymouth at CSD’s headquarters in London as part of a ‘crit and ideas’ workshop.

David’s Presidency of the Chartered Society of Designers is a testament to a fascinating design career, built from solid foundations and carefully embellished throughout years of dedication. A career that allows for invaluable insights as to the future of design by looking back at the complex evolution of professional bodies and how they have developed to provide the best support for designers.