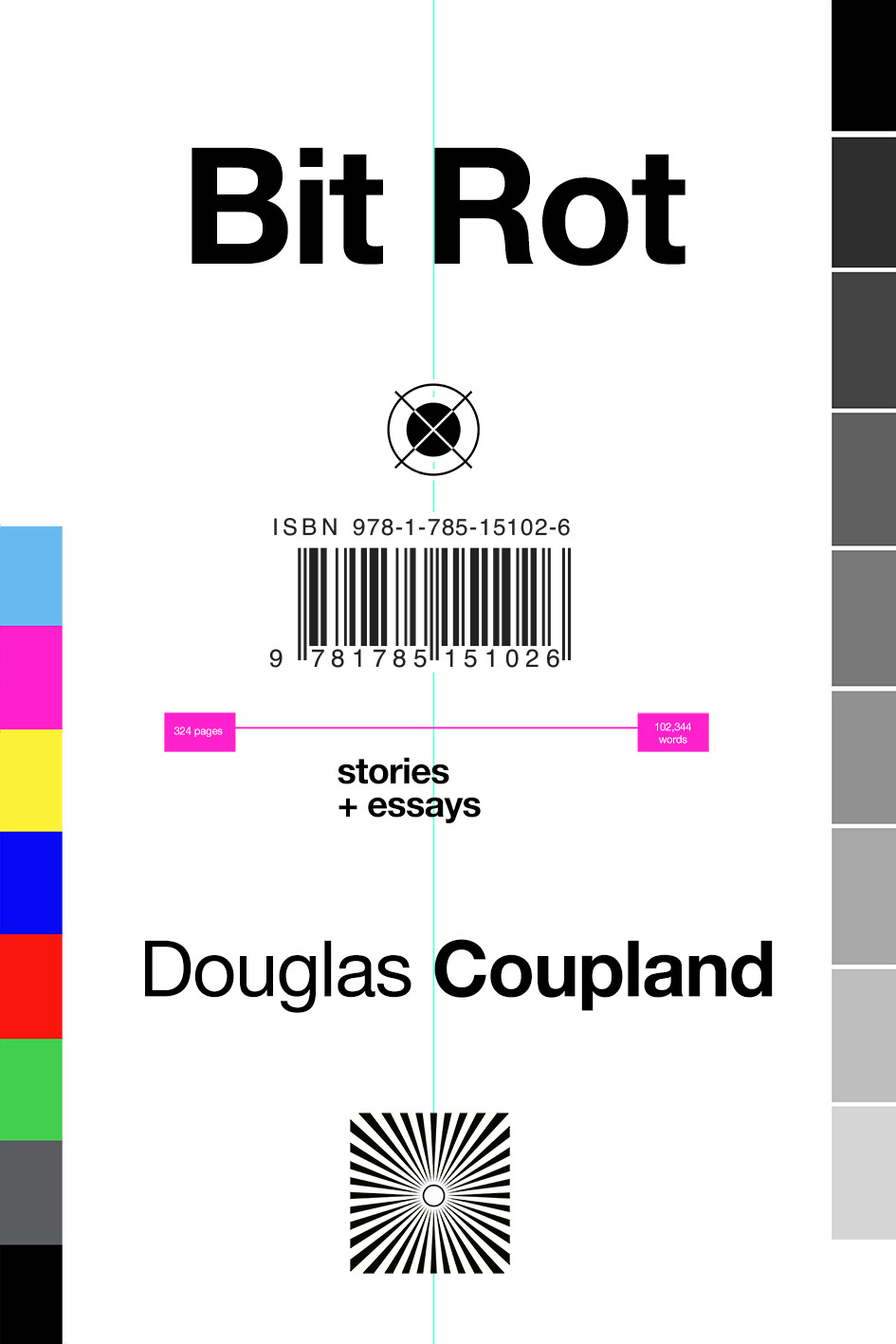 Doing the ‘Links Quiz’ in the FT Magazine on a Saturday morning is one of my more mundane addictions. More often than not I am frustrated by the fact that the quiz comprises of questions that prompt, ‘yes I know that – I am sure I know that’ only to find that the answer eludes me and has decomposed within my memory.

Now and again, flipping backwards through the weekly magazine, the FT will have commissioned an article from Douglas Coupland and I can sit back with another addiction – coffee – and be confronted with observations and questions that at least do not have binary answers, if any answers at all!

It is with great anticipation therefore that I embarked upon ‘Bit Rot’, Coupland’s collection of writings that in the words of the sleeve, ‘explores the ways humanity tries to make sense of our shifting consciousness’. In a series of 69 short pieces of fiction and essays housed in just over 400 pages, Coupland tries, sometimes more successfully than others, to offer glimpses of the future whilst holding a mirror up to the present and casting an eye back to the past, exploring how, ‘his brain has been feeling’.

Bit Rot, the spontaneous decomposition of digital files, is the concept behind the writings as Coupland explores how his brain sheds older connections and enhances new and unexpected ones. Creativity I here you shout and not surprisingly given that Coupland is described as a writer, visual artist and a designer. This process of superseding older thoughts and connections with newer and unexpected ones is the basis of creative design thinking.

The book is filled with anecdotes that spark thoughts and especially designerly thoughts. Which designer will not have a list of ‘The Ones that Got Away’, the title of one of the essays in which Coupland muses on his dismissal of past ideas and concepts including in 1985 his assertion that people in North America would not entertain the idea of drinking coffee outside of the home – enter Starbucks.

The writings offer observations but they also inspire you to think and most importantly to think the unthinkable. And the important thing is not to consider whether the thinking or your interpretation is right or wrong – just that you think and experience consciousness, ‘je pense, donc je suis’.

In ‘Living Big’, Coupland offers a thought that could run contrary to all of those often government driven societal challenges embraced by the design sector to reduce obesity by suggesting that, ‘healthy people are bad for capitalism, and obese people are simply, much better for the economy than thin people’. He suggests that, ‘they eat more food and in so doing drive up the need for agriculture, food processing, packaging and advertising. They get more sick more often and keep the medical system busier. They rely more on their vehicles’. In fact he submits, ‘there is not one single aspect of capitalism that is not enhanced, on the dollar level, by obesity’.

Thought provoking stuff for packaging, advertising, hospital, medical, service and vehicle designers! As thought provoking as his assertion that ‘minimalists’, and most designers will be eager to describe themselves as such, are actually ‘extreme hoarders: they hoard space’.

This is one of those books to pick up and put down, welcoming the reader with short attention spans.

His questioning of things that we take for granted is interesting and as a result of his almost clairvoyant ability, often topical. In the short piece entitled ‘Unclassy’ Coupland suggests that, ’it is only a matter of time before China begins to open factories in the United States’. Well it was written before the Presidential election!

Coupland has been writing since 1991 and has 13 novels under his belt as well as contributing to The New York Times and Vice, to name just a few. In 2015 Coupland produced a large solo exhibition called Bit Rot at Witte de With Centre for Contemporary Art. This exhibition presented his ‘mindscape’, featuring his own work, pieces from his personal collection and some material that stemmed from his residency at the Google Cultural Institute in Paris. This exhibition continued to travel internationally.

Bit Rot is published by William Heinemann, part of the Penguin Random House group of companies (RRP £20, Hardback). CSD members can buy the book with an exclusive 20% discount and free P&P. To receive this discount log into the member’s area and follow the instructions outlined, including a promotional code in Offers, within the members area of the CSD website.